All about the Victor Hugo Creative Arts Challenge

Margaret Jones, our school and education liaison officer, who managed the project and created the accompanying materials and guidance, tells us the story of this unique competition for Guernsey schoolchildren. 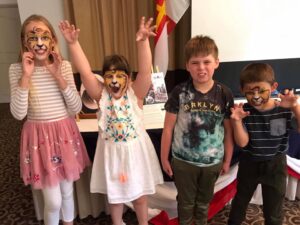 The theme for the Society’s annual Victor Hugo Weekend, which was planned for summer 2020, was to have been ‘Victor Hugo and Childhood’. To run alongside it and complement that theme, Victor Hugo’s epic poem, ‘L’Épopée du Lion’ from L’Art d’être Grand-père was chosen for the Schools’ Challenge. In the event, despite our plans being adversely affected by Covid, we adapted to the circumstances and were able to continue successfully with our schools’ challenge by moving it online.

Hugo wrote this long poem for his grandchildren, Georges and Jeanne (Georges and Jeanne had strong links with Guernsey both as children and as adults.) Pupils were encouraged to read the poem, or extracts from it, in English or French and submit their individual own work interpretations in painting, collage, sculpture or creative writing. Timothy Adès had published a rhyming translation of this poem in English (‘The Big Story of the Lion’) and was delighted at the prospect of visiting Guernsey in March to help interest our schools in the Creative Arts Challenge. The Society had intended to present in Guernsey as a complement to the Challenge a spectacular one-man performance in English for schoolchildren of the poem by French actor/singer and educationalist Pierre Grammont, based on Timothy Adès’ translation, but Covid meant this proved, alas, impossible. The performance may, however, be seen in French on YouTube.

Engagement with schools and teachers

In order to publicise the Challenge, I visited 26 Guernsey Primary and Secondary Schools, including special schools, to meet with teachers and deliver posters. I also contacted schools in Herm, Sark and Alderney. I provided teachers with support materials to study the poem including lesson plans which I devised together with a simplified version which I had written for younger children.

When Marie Hugo, the international artist and great-great-granddaughter of Victor Hugo, heard about
about our Creative Arts Challenge, she was inspired to paint a scene from the poem to be
used to create twenty limited-edition souvenir mugs for the Primary School winners, and three
limited-edition lithographic prints for the Secondary School winners.

The effect of the lockdown

Unfortunately, the planned week-long programme of school visits by Timothy Adès had to be
cancelled because of the Covid lockdown. Our Honorary Secretary, Roy Bisson, swiftly organised the Challenge to go completely on-line and I contacted schools who agreed to use our materials for distance
learning. Herm School pupils showed clearly that they had understood the poem and their
teacher used it very effectively for a home-learning cross-curricular project. Adversity
produced a positive outcome!

Prizes and a party

Our Chair, Dinah Bott, and Roy organised two prize-giving events just after lockdown was lifted. The
Primary Schools’ event for Award Winners was at St Pierre Park Hotel on 28 June. It included a buffet tea for winners with their parents, siblings and teachers. There were specially made cup-cakes with lion faces, face-painting and an exhibition of pictures of Victor Hugo as a Grandfather. There was also a slide show of all winning entries and a recorded video message from Head Judge, Timothy Adès, which was very well received. We would like to extend our heartfelt thanks to the St Pierre Park Hotel for their very warm welcome to the Society, the effort they made with the creation and presentation of the buffet tea, and especially their gracious treatment of the children and their parents.

Marie Hugo had intended to present the awards but was unable to travel from France because
of Covid. I was honoured to read a letter she had written to the children of Guernsey. Each
winner was presented with a mug – there were only 20 created uniquely for the Challenge – and a scroll copy of Marie Hugo’s letter.

A special evening at Hauteville House

The Secondary Schools Award Ceremony was held on 1 July by kind permission of Odile
Blanchette and Hauteville House. Dinah made a welcome speech to the three award winners;
their parents and teachers and the original award winning entries were displayed in the
sumptuous Red Room. Each award winner was presented with a framed limited edition of
Marie Hugo’s lithographic print, a scroll copy of Marie Hugo’s letter and a voucher for a
future family visit to Hauteville House.

A splendid picture of the Lion by three school pupils in Guernsey, prompted by The Victor Hugo in
Guernsey Society’s 2020 competition, was commended ‘hors concours’ as it was sent in as a
joint entry by a school club. They were awarded separate prizes.

Well done to you all!

The Victor Hugo in Guernsey Society has been thrilled and gratified by the enthusiasm with which teachers and pupils took up and embraced the 2020 Creative Arts’ Challenge. Well done to all schools who took part!

Note from the Chair: Our heartfelt thanks go to all the individuals and organisations who supported us so generously with their time or by donation: thanks to them, more Guernsey children than ever have been introduced to Hugo’s writing and have come to know a little bit more about the extraordinary genius and humanitarian who lived amongst us here in Guernsey over 150 years ago, and who is still relevant today.