‘The next day, in Guernsey, on the White Rock, between Farrell and Falla, my father stood waiting for us, a silk scarf tied hastily around his neck as it was early morning. Farrell took our luggage and Falla, cracking his whip, carried us off to Hauteville House.

They gave us my great-grandmother’s room. As with all the bedrooms in the house, the windows gave out on to the street. Its dark furniture and the tasselled curtain material, peacock blue with big pink peonies, which also covered the armchairs, made you think of a Chinese garden at night.

‘Let me go back to my black Guernsey!’ said Victor Hugo after his exile. But nothing could be less black than this town of St Peter Port, when seen from the roads, its terraces making their way up the sides of two hills. Nothing is less dark in my memory than my years of childhood and youth spent in this island.

White, pink, blue, purple: in the granite main hall, skate, congers, crabs lobsters, shrimps, mackerel, laid out in front of the fishwives, whose language is Norman.

Pink, red, yellow: in the shadows, too, in the stone nave, the haunches of beef and lamb and the butchers in their blue coats and striped aprons.

Yellow, pink, orange-tinted and all the rainbow hues of mother-of-pearl: the display of the shellfish vendor in his little mezzanine, opposite the French Halls and the church.

Making their way between these multi-coloured bouquets were the bakers’ white vans, the carts of the coalmen with their horses caparisoned with copper, and on market days, the crush of the crowd come in from the country parishes; some women still wore the traditional mauve dress and wide-brimmed black sun-bonnet, many men were in bowler hats, nearly all spoke Guernsey French. Even though quite a few had some physically abnormality, you couldn’t help but notice the four hunch-backed brothers from Torteval, dressed in blue serge, who never left each others’ side.

Also hard to miss was someone who was shaded a little grey, making all these bright colours stand out even more by contrast, a character we schoolboys called Soapy Sam. He usually stood on one of a low set of steps between the fruit and flower stalls and a water fountain near which the coaches and cabs used to wait. With the crown of his straw boater broken in, his small moustache and black sideburns, his shirt collar always unwashed, his extravagantly knotted tie, his old and patched jacket, his trousers too big and too long for him, his shoes worn out, and his thin cane, he was the absolute forerunner of Charlie Chaplin. He hailed the drivers, helped their customers up into their vehicles, and saluted ceremoniously as he took his tips.

Gold and silver: on the grey walls of High street and the Arcade, the golden lettering of the shops and banks, the glittering of the silver dishes in Roger the Jeweller’s window, the golden green of the verbena in Collenette the chemist’s, the white and gold of the façade of the Yacht Hotel and Le Noury the baker’s shop front.
Red and gold: the wooden Scotsman at the door of the tobacconist’s at the bottom of High Street.

Blue and red: the china statuettes, the Staffordshire figurines on the mahogany furniture in Machon the antique dealer’s in the Lower Pollet, which leads to the harbour.

Garnet red, bright yellow and red-brown: the bottles of wine, the jars of mustard and the hams you had to pass on the way up to the tearooms in Le Riches, where, sitting on the deep sofas, pretty ladies took tea with the officers of the garrison, to the sound of the violins of the Santangelo Orchestra, on tour in the islands.

Orange-tinted, yellow, pink, lilac, grey-blue: behind their araucarias, their yuccas and their magnolias, the lovely painted residences of the Grange, the faubourg Saint-Germain of Guernsey.

And finally, pink, mauve and blue: the flower-beds and the hydrangea hedges in front of the white-windowed granite cottages in the country lanes.

All this had hardly changed in six years. The painted wooden Scotsman had been bought by an antique dealer. Soapy Sam had gone but lived on in Charlie Chaplin, the four hunchbacked brothers were dead and all my schoolfellows had been killed in the war. But the rest remained, including the memories of my happy school years, spent in that big yellow ochre building with its crenellations, easily picked out from the deck of the boat well before you got into the harbour.

From the window of the study I shared with two school friends, you could see a huge and diverse panorama. To the right, you looked down the Grange, where we saw the girls whizz past on their bicycles, the cabs hurrying down to the harbour with their two-note bells ringing, after the arrival of the packet was flagged on the pole at Castle Cornet; the college headmaster leaving to go fishing, wearing his little black cap, his coat-tails flapping in the wind; the red-faced retired colonels, in their rough light-coloured clothes, making their way towards the Grange Club, and the old women returning from the market, their little round baskets full of fruit and flowers. Further down, a dark wall: the prison. Occasionally we saw a white flag raised over its roof: it was empty. Opposite us, above St James’s Church, where we sometimes went in the evening to sing old Simeon’s canticle, our view took in the harbour and the whole archipelago: the reefs, the beacons, the tower on its own amongst the waves where once upon a time a lone gunner whiled away his days, the fishing boats executing their sharp turns, the Platte-Fougère lighthouse which bellowed every time it was foggy; Herm, whose kangaroos and shells we could not, alas, make out; Jethou, whose rabbits we couldn’t see either; Sark, whose grottos carpeted with multicoloured sponges I had visited, Alderney and the Casquets which were written of by Swinburne, and far off, on a clear day, the bell-tower of Surtainville on the French coast!

It was a blessed time! My schoolfriends collected butterflies and seabirds’ eggs. We used to go to a nearby farm to watch the boar cover the sows. We bought ‘rolls’ from the baker, an enormous man with a long grey beard, always white with flour. His name was Le Poitevin, but we called him Peewee. He always spoke to me in French. He and Mrs Peewee, a sweet old dear with lovely white hair looped back from her face, treated us like their children.

As we were forced to keep to our school uniform, a regulation dark grey, navy and black tie, we kept a watchful and jealous eye on the elegance of the officers of the garrison. The colour of their clothes, mustard yellow, pepper or cinnamon, their jazzy ties, their sulphur-coloured waistcoats, we found it all dazzling. No detail escaped us: the number of buttons on their sleeves, where they kept their handkerchief, how they held their canes.’ 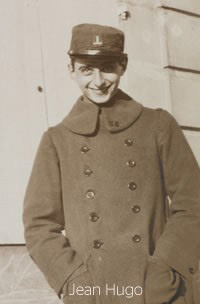 Jean Hugo was born in Paris in 1894, the son of Georges Hugo and his wife, Pauline Menard-Dorian. His wife’s family owned a holiday home on the cliffs at Icart in Guernsey known as La Marcherie. From 1907 until 1910 Jean was at school at Elizabeth College in Guernsey. He enjoyed his time at school here greatly; he played football, was very good at boxing (his bony physique gave him a long reach !), did a great turn in the annual French school play, won prizes for French and Latin and excelled at art. He was in School House and during term time probably boarded. We do not know if he remained in Guernsey for the summer. He recalled his school years in Guernsey in a beautifully written vignette in the second of his two biographical works, le Regard de la mémoire, which was published just before his death and takes his life up to 1945.

After leaving College he attended sixth-form in Paris. Like his father he joined up as soon as he could, in 1914. He was wounded in May 1915 at La Targette in Pas-de-Calais, and rejoined the front in September 1915. He commenced then an extensive series of extremely well-observed and delicate sketches and drawings of operations in Artois, Verdun, and Picardy, which he continued until 1918. They depict war-torn landscapes and scenes of soldiers’ lives at the front and behind the lines. Aside from their artistic merit they join his father’s war sketches as being very valuable documentary evidence of WWI.

Hugo went on to mix with the artistic post-war elite, amongst whom he counted as great friends such luminaries as Jean Cocteau, Pablo Picasso, Paul Eluard, Francis Poulenc, Max Jacob, Cecil Beaton and Eric Satie. As well as painting vividly in oils he illustrated books with watercolours and lithographs. He was particularly interested in the theatre and designed costumes and sets, for which he produced exquisite maquettes. His work was greatly appreciated in the UK and America, and he painted backdrops of Stratford-upon-Avon for the Quatercentenary of Shakespeare‘s birth in 1964 which are in the collection of the V&A. In 1931 he acquired an estate in Provence, the Mas de Fourques at Lunel, which remained his base until his death in 1984. He married twice, first to artist Valentine Grossman, and secondly to Laura Hope-Nicholson, by whom he had seven children.

Maurice Sachs: ‘Jean Hugo was calm, kind and generous. Life flowed calmly before him and as far as we knew he had no enemies. He carried the heavy burden of his family name with elegance. Like his father Georges Hugo he was a man of the world, a man of great distinction in heart and spirit, a kind friend, a man you would want to have in your life.’ La Décade de l’illusion (Paris: Gallimard, 1950 pp. 14–16) This costume was designed by Jean Hugo and worn by Vicki Karras as a Spaniard in the pas de six Autre Guitare choreographed by Geoffrey Caulty in the ballet c.1830.

The ballet formed part of the programme of the gala The Greatest Show on Earth at the London Coliseum on 22 June 1971, organised by Richard Buckle in aid of the Save the Titian Fund and the Museum of Theatre Arts (now part of the Theatre Museum).

© Victoria and Albert Museum, given by Richard Buckle CBE