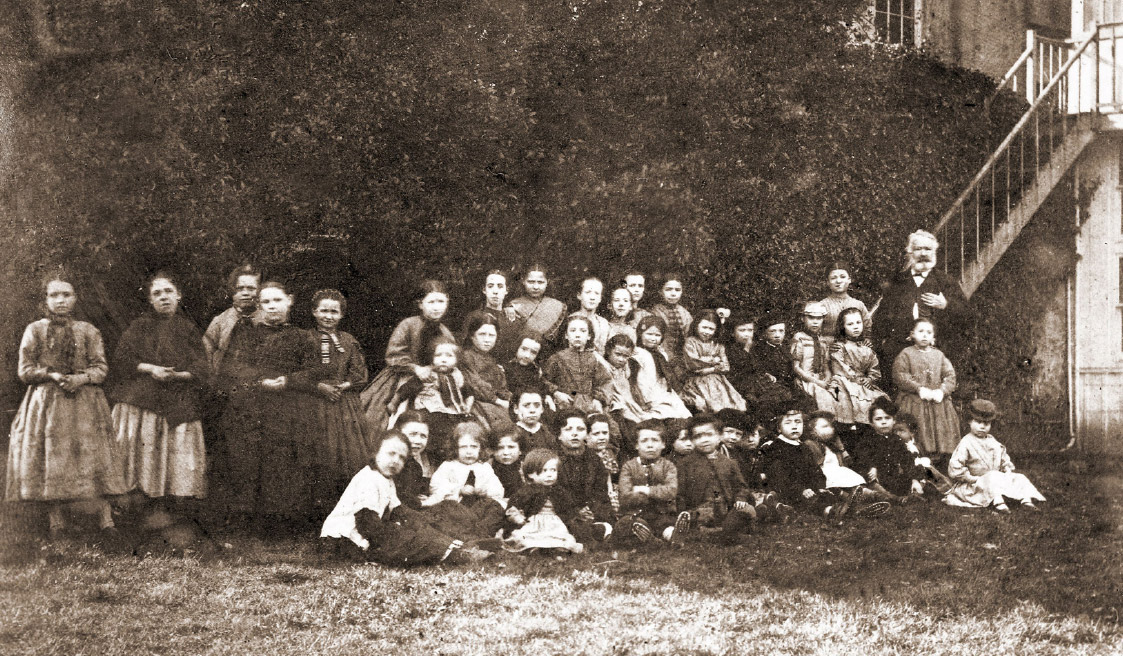 Posted at 15:05h in Resources by admin

‘Here is the truth of it: the only way Victor Hugo ever put himself out for the sake of the poor children was by making a short appearance at their dinner, and letting them use a room in his house in the winter and a corner of his garden in the summer as somewhere to put the table. Mme Hugo, on the other hand, upset by the wretchedness she saw all around her, had for some time been begging her husband in vain to give her some money towards her praiseworthy aim of alleviating it, especially for the children. These were Catholic children, mostly French or Irish, abandoned by the welfare networks of the Church of England which only looked after its own, and was pitiless in its refusal to help anyone else. All this made my charitable sister-in-law indescribably sad. When she realised that her appeals to her husband, who chided her for her spending, were useless, Mme Hugo, whose only luxury was doing good deeds she could not afford, decided to see if her friends in Paris would take up the children’s cause, and it was during her visit to Paris around this time that she managed to collect enough money for the initial funding of the institution she had set up. She brought a huge amount of clothing back with her and had enough money left to set up a fund to continue her work.

So it is really down to her and her activities, to her warm sollicitude and charity with which she managed to convince her friends to help, that the poor children of Guernsey owe those few alleviations to their misfortune while she was alive, and that a small fund continued after her, if her wishes were fulfilled. It is definitely Mme Hugo and her memory only that they should thank; Victor Hugo had nothing to do with it and did not get a farthing out of his wallet for the poor children’s meal that he nonetheless takes credit for in his letter to Castel. In fact, he had wanted to bestow the royalties from the book of drawings elsewhere: he intended to make a gift of them to the Society of the Men of Letters, and the Society of Dramatists. The Society of the Men of Letters had given in to unbearable pressure and erased his name from the list of their honorary presidents, which was when he had made up his mind to give them a gift. Auguste Vacquerie wrote Mme Hugo a very fine letter on this subject, which I found in the papers my sister-in-law left to me; I offered to return it to Vacquerie, but he told me make whatever use I could of it. Here it is:

“Chenay has just left; I read him your husband’s letter, but I did not give to to him – in fact I tore it up in front of him. I will explain this puzzle to you: you husband was asking for his royalties in this letter, but in order to add them to the funds of the Men of Letters and the Dramatists. Now, I find the idea both insensitive and impossible. The Men of Letters have treated you husband unworthily, by erasing his name from the list of Honorary Presidents. To answer this insolence with a donation is just too magnificently Christian. It gives the impression that he is begging, trying to soften them up, to buy their goodwill. The Society cannot help but make him president again if it accepts the cash; but they may not accept it, the Committee is composed of Bonapartistes. When I told Meurice your husband had it in mind to do this, he flew off the handle. “He can’t do that, he mustn’t let it be up to ministers to give him charity, he mustn’t expose himself to the possibility that they return his money.” The Society of Dramatists isn’t much better, and even if they were one hundred times better, he still shouldn’t give them anything else. People would say: he has given them something because they haven’t taken his name off their list, he is furious that he has been erased from the other; so it is impossible to give the Men of Letters anything and impossible to give the Dramatists anything without giving something to the former.

Your husband would really do best to keep his royalties for himself. As I hope he will decide to do this, I did not want a letter in which he promised to donate the money to the Societies hanging around, so I tore it up. Tell your husband to keep the money, and not to ask for it all at once, the publisher hasn’t much ready cash; he would appreciate it, for example, if your husband contented himself with the three thousand francs he received up front, and then the profits can be divided three ways, between himself, the publisher, and Chenay. As for the stipulation that it not be published before Les Misérables, that is of course quite acceptable. If your husband agrees to this could he please just write a few lines to that effect so that Chenay can show them to the publisher.”