The FLowers and plants 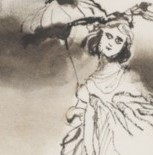 The wallflower, able to grow in the poorest of soils and in the mortar of walls, has a beautiful scent. It is naturalised in Guernsey. The ‘gillyflower’ refers to any plant with a strong clove-like scent: often mentioned by Victor Hugo, originally it was the pink or carnation, which was much prized in the Middle Ages, being a favourite flower of Charlemagne, and later the stock, Matthiola incanis. The stock was once known as the Garnsey Violet.

‘In May, when the branches are swollen with perfume,

I often have conversations with the gillyflowers;

I garner counsel from the ivy and the cornflower.’ 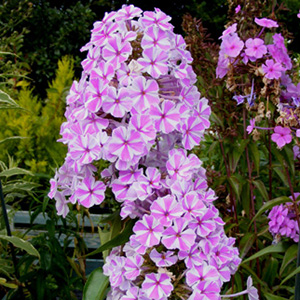 The Phlox is an American plant, first introduced to Europe in the early 1800s. Déruchette is growing a flower that would have been relatively unusual in British gardens in the 1820s and virtually unknown in France, and which we might assume Hugo had seen in Guernsey gardens, with its close maritime links to America. Phlox maculata ‘Natasha’ is of a species commonly known in the USA as the meadow phlox, or wild sweet william. It is a mildew resistant species, which is an advantage in Guernsey’s humid atmosphere, and the flowers are scented. The bright red colour of some other species of phlox gave it its name, ‘fire flower’, and as such it may recall the symbolism of the ember-red poppies of the field Cosette wears as a crown in Les Misérables.

The purple mullein, Verbascum phoeniceum, is found in southern Europe, northern Africa and central Asia. The flowers are very attractive to bees and other insects. It thrives in well-drained dry soils with full sunlight, and can be sown every year by scattering seed. Like other plants listed here by Victor Hugo, it can be found growing wild on hillsides, disturbed sites and woodlands. It requires cold winter temperatures to break its seeds’ dormancy. Its leaves and flowers are antimicrobial. It has become naturalised in Guernsey. 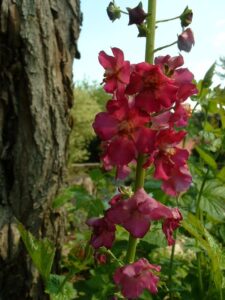 The red hawksbeard, Crepis rubra, is a pretty and prolific annual wild flower from Greece that grows in relatively poor soils.

Potentilla nepaulensis, Hooker, was introduced to Europe from Nepal in 1822. It was also known as Potentilla formosa, the ‘Beautiful Five-Finger’ and in the 1820s would have been a very rare item indeed.  It has been planted at the rear of Déruchette’s Garden.

The pink oxalis is native to Patagonia. Ships rounding Cape Horn would pick and eat the leaves. or make them into tea, as they are full of vitamin C, and as such were a cure for scurvy. Again, this plant would have been quite likely to have been found in a sailor’s garden.

Geum coccineum is commonly known as the red or orange avens, in French the ‘benoîte coccinelle’. Its name in French means ‘blessed’. as in ‘herb bennet’, and ‘ladybird’ (coccinelle). Ladybirds are regarded in France as good luck and particularly as ‘God’s creatures’ (bêtes de bon Dieu’), presumably to ensure the luck. Victor Hugo write a love poem called ‘The Ladybird.’

The bright flowers of the orange avens bloom in spring and summer. It is native to Turkey and the Balkans, and was to be found in monastic herb gardens. 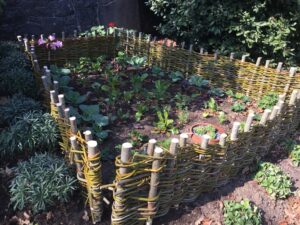