‘… the love of a family is the centre of gravity and brilliance of everything’ [A Mlle Louise B, 1835]

‘I hope, dear child, that eventually one day you also will find some happiness in it, you, and that you, who have the delicate feeling for melody and harmony, you will not always be unreceptive to the great harmony of God. My garden is the balcony of that particular opera. Come back, my beloved daughter, as soon as you can, and your mother, too. I kiss you both.’ Letter to his daughter Adèle in London, Guernsey, May 1859 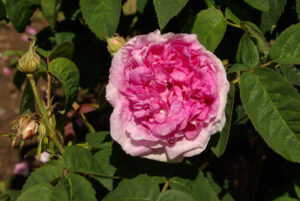 ‘I will have no rest as long as that poor child is unhappy,’ Choses vues, 1865

Adèle Foucher (left) was Victor Hugo’s childhood sweetheart. She and Victor Hugo married very young, in 1822.  She gave him five children in quick succession, of whom four survived infancy, the last of which was her namesake, Adèle (seen here on the right in her mid-twenties). Her birth in 1830 was not auspicious, as her mother began an affair soon afterwards with Hugo’s trusted friend, the critic Charles Saint-Beuve. Victor and Adèle remained on reasonable terms and he held her in affection all his life; his own parents had had a bitter separation and family meant everything to him. Adèle’s wish to help the poor children of Guernsey was the inspiration for Hugo’s post-Les Misérables project of feeding les enfants pauvres. Their daughter, Adèle, was a writer and musician whose talents never came to true fruition. Regarded as a great beauty, she had enjoyed her time in Jersey, even falling in love for a time with a Jerseyman – but became disenchanted with her exile’s life in Guernsey. She eventually left home in secret and took a ship to Canada to search for her lost love, an Englishman called Albert Pinson, who really wanted nothing more to do with her. This caused her family great trauma; Victor Hugo called her his ‘poor lost girl.’ She was brought back after nine years, having found her way to Barbados, and spent the rest of her life in an asylum: ‘more dead than the dead,’ cried a distraught Hugo.

A highly regarded movie of her struggles with her mental health, based on her diaries, The Story of Adèle H., was filmed in Guernsey in 1975, with several Guernsey locals taking part; it starred a young Isabelle Adjani and was directed by François Truffaut. Victor Hugo and his wife were virtually separated towards the end of her life. Victor Hugo was unable to attend his wife’s funeral in Villequier in Normandy in 1868, where she was laid to rest next to their other daughter, Léopoldine, who had died in 1843; he was still in self-imposed exile and travelled as far as the French border. Adèle Hugo lived until 1915, the only one of Hugo’s children to survive him.

Gallica rose ‘Adèle‘ was obtained from Roses Loubert in France. It was raised by an 18th-century rose breeder, Jacques-Louis Descemet, who had inherited a large rose nursery in Paris from his parents in 1785. Gallica roses were at that time grown mostly in the Netherlands and in Belgium. They began to be popular in France in the Napoleonic period, when the wars prevented the rose growers from obtaining other species to breed. ‘Adèle’ is one of the nearly 150 varieties of Gallica rose that Descemet produced 1802-1815. After this he moved to a French colony in Russia. [François Joyaux, La Rose de France, 1998]. It is of compact growth, with pink flowers that turn violet as they fade, with a yellow eye, and is strongly fragrant.