Victor Hugo loved the theatre and wrote extensively for it. He occasionally designed sets for his productions and was involved in the choice of actors, composers and music. However, his plays were often subject to political censorship, which he detested.  The theatre could be a powerful weapon; it was a way, sometimes the only way, of informing a public that was often illiterate, and the authorities in France had consequently kept a tight rein on it for centuries. In exile, his family and friends would put on plays at home, and Hugo had intended some day to build an outdoor ‘green’ theatre in the garden at Hauteville House.

Several of Hugo’s plays, written before his political career and exile, became the basis for operas. He took up writing for the theatre again in Guernsey, and these later dramas are works of unusual modernity. Published after his death, they are known as The Theatre in Freedom, as he refused to allow them to be put on in France while his work was still censored there. In 2018 The Victor Hugo in Guernsey Society produced in Guernsey the world premiere in English of one of these plays, The Intervention, written in Guernsey in 1866. Amy Robsart is one of several plays written by Victor Hugo. Some saw great success, others less so. Amy Robsart‘s run lasted just one night. The play was based on Kenilworth, a novel by one of Victor Hugo’s great influences, Sir Walter Scott, while the costumes were designed by Hugo’s friend, the artist Delacroix. Hugo had begun the play in 1822, only one year after the publication of the novel, with a collaborator named Soumet. When his colleague dropped out Hugo shelved the project. He began working on it again in 1827. Amy Robsart was ahead of its time and suffered accordingly; it was a play in the controversial Romantic tradition, a full three years before Hugo’s eventual victory over the forces of conformism with his play Hernani. Hugo, who was advised by his friends that it was unlikely to be a success, persuaded his brother-in-law, Paul Foucher, to put his name to it. The play was roundly booed, a male character named Flibbertigibbet (taken directly from Scott’s novel – and from Shakespeare) proving too ‘grotesque’ for the audience. Disappointed but not surprised, Hugo revealed himself to be the author and took the flak. He was to have the last laugh with Hernani.

‘Amy Robsart’ is a sweet-briar or rubiginosa hybrid, bred by Lord Penzance at Eashing Park in Surrey and introduced to gardens in 1894. It was obtained from David Austin Roses in the UK. 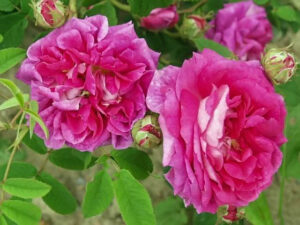 Doña Sol de Silva is one of the most celebrated characters from what is probably Victor Hugo’s most famous play, Hernani. Before the advent of literacy amongst the masses, the theatre was the means to inform and educate the public, so in many countries, including France, it was heavily controlled and censored. Victor Hugo rebelled against the crushing forces of classicism and conformism and ushered in modernism in the form of a drama set in 16th-century Spain. Swashbuckling and intense as the play may seem today to us, Hernani not only broke the barriers of form but used an historical setting as a criticism of the current regime, a device that Victor Hugo was to make much use of in the future. The hero is a noble outlaw, a bandit and a rebel, passionately in love (with Doña Sol) and driven by inexorable fate. Victor Hugo, at 28 years of age, makes clear his ambitions as to the kind of Romantic hero he was to be in his life. Hernani is celebrated because the fight between the two forces of conservatism and modernism was literally that, a fight, which has gone down in history as The Battle of Hernani. The ‘Battle’ took place upon the opening of the play in Paris in February 1830 and has gone down in literary history. It took a month of disrupted performances and chaos in the theatre for a determined Hugo and his troupe to wear the opposition out.

In 1868 a troupe of French actors came to Guernsey to play Hernani in Guernsey’s only and tiny theatre, specifically to honour Victor Hugo. Hugo was persuaded to attend; he and Juliette Drouet saw the performance from behind a curtain. An audience that had watched in virtual silence greeted his appearance at the end of the play with enthusiastic applause – the conservative grandees of Guernsey were making their peace with Victor Hugo.

‘Doña Sol’ was obtained from Roses Loubert in France. It is a gallica (or centifolia) rose, compact in form with arching branches; its flowers are pinkish-red with white flecks and very full. It was bred by Jean-Pierre Vibert (1777-1866), one of the most famous of 19th-century French rose growers.