The humble saxifrage, the rock-breaker (a nickname which probably derives from its medicinal use against kidney stones), has a special significance for Victor Hugo. It is the fleur du gouffre, the ‘chasm flower’. Victor Hugo’s travels to the mountains of the Alps and Pyrenees brought this humble flower to his notice. Standing fast against the storm, flowering in the most inhospitable of places, the seemingly fragile saxifrage can find a place and survive on the hardest rock, its name recalling Hugo’s recurring motif of ‘the power of the weak’. Hugo himself seems to have identified with the plant, clinging on, finding its niche in the most inhospitable of places from which it can flower, almost in defiance. In the ChanneI islands he not only finds inspiration in nature, but becomes part of it, rooted deep within it. Hauteville House, too, is perched on a rock, like an eagle’s nest, from where he weathers the storms of political exile and yet thrives – no doubt Victor Hugo was reminded of the saxifrage by the pink thrift, the ‘thriver’, the ‘conserver’, which, although washed and beaten by the waves, grows and flowers on the wave-torn rocks of Guernsey.

The saxifrages can be found in sections 2 and 3 of the Victor Hugo Garden. 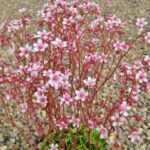 This tough little plant, an Irish hybrid popular in cottage gardens, may have taken its name from its ability to withstand the urban smog of Victorian London, reflected in Victor Hugo’s words: ‘London is a Noise under a Smoke.’ Despite his dislike of the city – ‘London, is a bore, a built one’ – it played an important part in his life. For centuries Britain, and especially London, had welcomed political exiles, whose use of its tradition of freedom of speech to express views unwelcome in their homeland was tolerated by the authorities. Voltaire, an anglophile whose admiration for England was reciprocated, and who much admired by Hugo for the wit and irony he showed while fighting an oppressive monarchy, is one of the most celebrated examples. Many French citizens had found sanctuary in Britain at the time of the Revolution and it was to prove a place of asylum again for those who were banished from France under the régime of Napoléon III. Hugo himself, expelled from Belgium, reached Jersey via London. His fellow exile, the lawyer Hennet de Kesler, who accompanied Hugo to Jersey and then to Guernsey, lived in London under an assumed name, ‘William Crawford’, while hiding from Napoléon III’s secret police, as part of a network of French exiles. Hugo’s incendiary denunciation of Napoléon III, which led to his expulsion from Belgium in 1852, was printed in London. Hugo visited London twice from Guernsey with his son François-Victor and the local De Putron family, but he was dismayed by the poverty and the dirt he found there.

In Les Misérables, the grandiloquent and dry Grantaire asks:

‘Should I admire England? Should I admire France? France? Why? Because of Paris? I have just told you my opinion of Athens. England? Why? Because of London? I hate Carthage. And then, London, the metropolis of luxury, is the headquarters of misery. There are one hundred deaths a year from hunger in the parish of Charing-Cross alone. Such is Albion. I tell you too, to top it all, that I have seen an Englishwoman dance wearing a wreath of roses and blue spectacles. So England can go hang!’

London was, of course, to be detested as the home of Queen Victoria and Lord Palmerston, supporters of the French régime and therefore enemies of Hugo, but also to be grudgingly admired as the city in which Charles I had been dethroned and Cromwell risen to the Protectorate, and as the home of Shakespeare and Milton. His daughter Adèle pretended she had moved to London in 1863, but was in fact in Canada searching for her lost love. London plays a major part in Hugo’s novel The Man who Laughs, written in Guernsey and published in 1869, The action is set at the turn of the 18th century amongst the low-life entertainers of Southwark and contrasted with high life of the House of Lords, after the restoration of the monarchy (James II and Queen Anne), reflecting Hugo’s own life both as dramatist (a career in the theatre was still regarded as discreditable) and peer of the realm. It ends at the death of Anne – and the death of Louis XIV. Just as France and Britain in the long 19th century are entwined together in an impossible tangle, so were Victor Hugo and London.