'Grandfather, too, of the flowers and the birds'

The Wild Garden was conceived by designer Raymond Evison as homage to Hugo’s love for unspoiled nature and the creatures that live in it. Hugo has been called a ‘proto-environmentalist’ – in other words, he would be considered an environmentalist were he alive now, but he held those views before the concept and word had been invented. Hugo instinctively realised and predicted that human abuse of nature would lead to future catastrophes. For him, the progress of humanity and the wellbeing of nature went in parallel and were inextricably linked. There could not be one without the other; what applied to humanity applied equally to nature. In abusing nature we are abusing ourselves. He shows great sympathy not only with ill-treated animals, who are the subjects of some of his most moving poems, but even with cut flowers and pruned trees. It is no surprise that Jean Valjean, in his earliest days of ignorance before his incarceration, works as a tree-pruner.

Plants, just like people, were mired in the earth yet sought to reach the sky, home of the Ideal.  The trees can commune with God through the birds, the flowers through the bees, flowers release their perfume, to the air, perhaps as far as the stars: how is humanity to do this? Trees and plants have their roots in the past, and build on them to rise up to meet the future, as should mankind: as important as progress is, humanity should not unthinkingly destroy its history and its historical monuments in its name. He recognised that both nature and mankind had elements that were intrinsically bad, but exhorted us to accept them and deal with them in a progressive way. In this section Raymond has included logs and broken pots to encourage the insects that Hugo so loved to show to his grandchildren.

‘Children! Love the fields, the valleys, the springs,

The paths that the evening fills with faraway voices,

And the waves and the furrows, rills that never sleep,

Where thoughts germinate alongside the grain.’

'I said: Don't frighten any plants or animals,
Laugh, but don't scare: play, but do no harm'

The buttercup is first mentioned by Hugo in the poem he wrote on the 6 March 1837, on hearing of his brother’s death in a psychiatric clinic. He was deeply shocked and emotionally moved by the news.

‘And we began to play again, picking bunch upon bunch

Of flowers, all the bouquets that gladden the grass,

Especially those flowers of flame and of gold that you see, so lovely,

That are falling from the skies!’

Here he is alluding to his mother and his childhood spent in the garden of Les Feuillantines with his brothers. Other flowers that are often associated with this garden in his poetry are bindweed, of which the perfume brought back memories, and daisies. These simple wild plants are used to evoke a time of childhood innocence, both of the poet himself and of the French nation, reborn in the Revolution.

Buttercups that I saw long ago at the Feuillantines,

Interestingly, for Hugo the buttercup is also associated with death, particularly that of his mother when he was 19. We should not be surprised, then, that when Victor Hugo visited Waterloo he remarked on and picked the buttercups he saw growing at the side of the battlefield. According to Hugo, to be found at Waterloo were also poppies, the symbol of death and regeneration, and violets, one of the Roman flowers of death and funerals.

‘It was surmised that [M Madeleine] must have lived formerly in the country, for he had all sorts of useful secrets which he taught the peasants. He showed them how to destroy the grain-moth by sprinkling the granary and washing the cracks of the floor with a solution of common salt, and how to drive away the weevil by hanging up all about the ceiling and walls, in the pastures, and in the houses, the flowers of the orviot. He had recipes for clearing a field of rust, of vetches, of moles, of dog-grass, and all the parasitic herbs which live upon the grain. He defended a rabbit warren against rats, with nothing but the odor of a little Barbary pig that he placed there.

One day he saw some country people very busy pulling up nettles; he looked at the heap of plants, uprooted, and already wilted, and said: “This is dead; but it would be well if we knew how to put it to some use. When the nettle is young, the leaves make excellent greens; when it grows old it has filaments and fibres like hemp and flax. Cloth made from the nettle is worth as much as that made from hemp. Chopped up, the nettle is good for poultry; pounded, it is good for horned cattle. The seed of the nettle mixed with the fodder of animals gives a lustre to their skin ; the root, mixed with salt, produces a beautiful yellow dye. It makes, moreover, excellent hay, as it can be cut twice in a season. And what does the nettle need? very little soil, no care, no culture; except that the seeds fall as fast as they ripen, and it is difficult to gather them; that is all. If we would take a little pains, the nettle would be useful; we neglect it, and it becomes harmful. Then we kill it. How much men are like the nettle!” After a short silence, he added: ‘”My friends, remember this, that there are no bad herbs, and no bad men; there are only bad cultivators.”

The children loved him yet more, because he knew how to make charming little playthings out of straw and coconuts.’

'I told the children not to mistreat the roses'

Other plants in the WILD gardeN 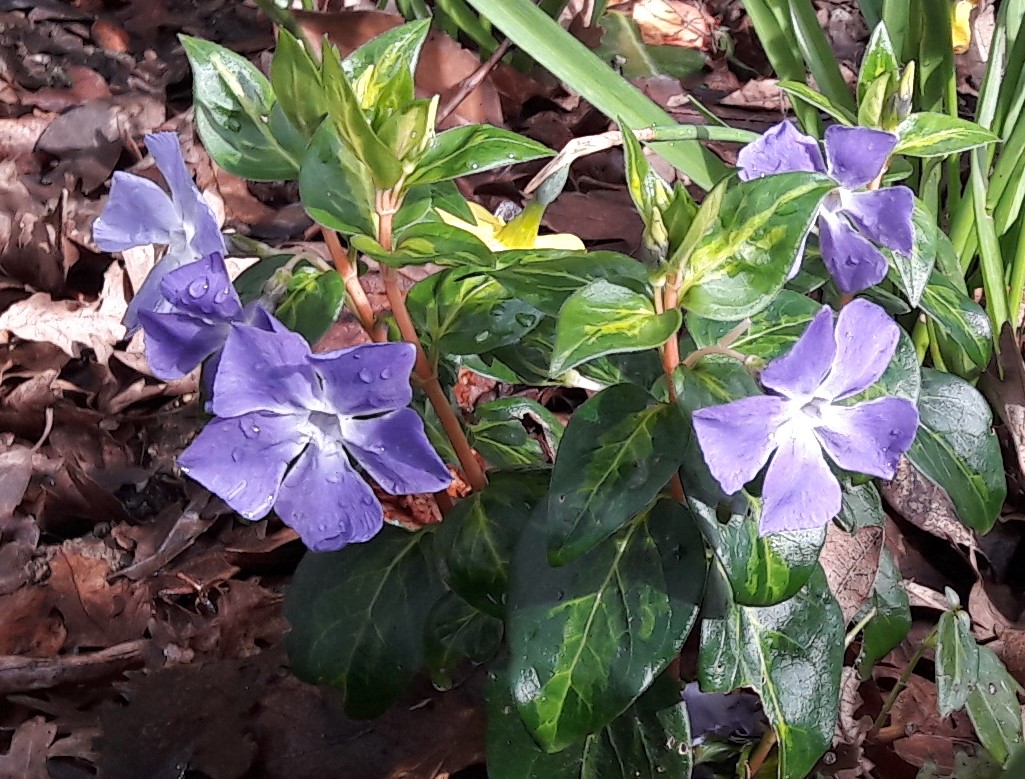 Helichrysum italicum has been included in the wild garden. A small shrub with a very strong fragrance of sage or wormwood, it has been used for centuries in southern and central Europe for its many medicinal properties. It makes a useful pest control in a vegetable garden.

… ‘It was the church of flowers, fettled

Without stone, deep in the waving wood,

By the thorn and by the nettle

With leaves and with wind made good.

The porch was made of two branches,

One of bramble and the other brush twined;

The vault, made all of periwinkles,

Was by ‘April, mason’ signed …

… I heard, in discreet stanzas,

Through a cool corridor lifting up,

The Te Deum of the daisies, and

The hosanna of the buttercup.’