The genesis of the Victor Hugo Garden

‘My life is your life, your life is mine, you live what I live; destiny is one. So take this mirror, and look at yourself in it.’

The idea for a Victor Hugo Garden in Guernsey was first suggested in 2019 by VisitGuernsey, who also funded the project. The Victor Hugo in Guernsey Society was asked for advice, and were thrilled to be involved in such an inspired and inspiring project. Candie Gardens, a late Victorian park in St Peter Port, Guernsey’s capital, was identified as the ideal situation for the Garden.

VisitGuernsey and TVHiGS asked Raymond Evison OBE, VMH, FLS, to design the Garden. Raymond has lived in Guernsey for many years and runs his very successful nursery business from the island, sending clematis and other plants around the world from his base here. He has spent six decades searching for and breeding the world’s best clematis, developing and introducing over one hundred clematis varieties and cultivars, many of which have featured in his gold medal-winning exhibits at the Chelsea Flower Show. Raymond, who like Victor Hugo has as one of his greatest passions the conservation of nature, is a plantsman who often travels around the world lecturing and on plant-finding expeditions. Amongst many offices he has held, he is a Vice-president of the Royal Horticultural Society, an Honorary Fellow of the Kew Guild and A Fellow of the Linnaean Society of London. VisitGuernsey and The Victor Hugo in Guernsey Society were delighted and honoured when Raymond agreed to design the Victor Hugo Garden, volunteering his time and expertise without charge. 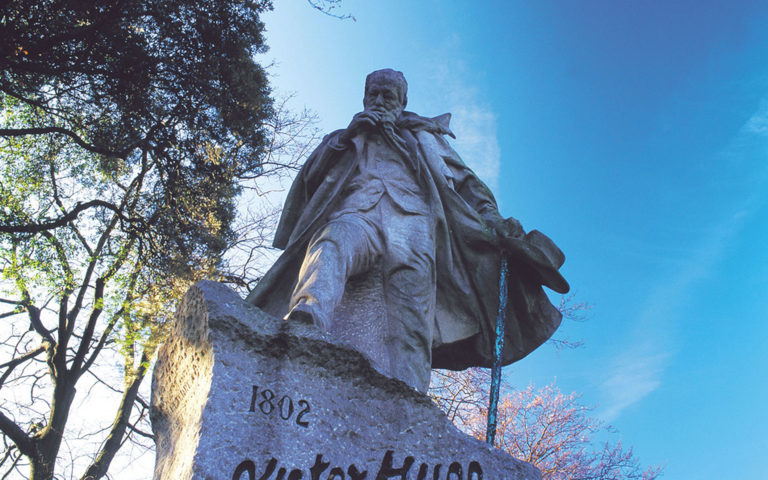 The celebrated statue of Victor Hugo by Jean Boucher, unveiled only a month before the beginning of the first world war in a fervent spirit of entente cordiale between France and Guernsey, stands at the top of the park. Below is an impressive sweep of greenery and trees: Victor Hugo looks out over a magnificent view, that of the harbour of St Peter Port and towards the islands of Herm and Sark, and beyond them to France. A long shrubbery-cum-herbaceous border, running from south to north, lies just a few metres behind the statue. Along its length a low grass bank slopes down to the path. A couple of green benches stand in front, sharing the idyllic sea view with the celebrated author and poet. The main elements of the border consist of mature trees and shrubs, planted against the tall stone wall; its elegant sweep is broken by a stately set of stone steps, framed by columns, leading up to a magnificent terrace above with a stone balustrade. At the unveiling ceremony for the statue of Victor Hugo in 1914 the present splendid camellias bushes were barely visible, having been planted below the terrace only a few years earlier. It is this border that was destined to become the Victor Hugo Garden. One of Guernsey’s most iconic and most photographed landmarks, Victor Hugo’s statue, was thus to be given a backdrop of luxuriant plants and flowers.

In a book about Hauteville House, Gustave Simon (1904), described Victor Hugo’s drawings. He had, he said,

‘invented his own flower, very much his own, a strange flower, a synthesis of different flowers, a mix of dahlia, pansy, chrysanthemum, daisy and clematis: Victor Hugo’s flower, which appears in his landscapes, in his decorative motifs, and the works of his imagination.’

These carved flowers were designed by Victor Hugo as decoration for Juliette Drouet’s house at 20, Hauteville, St Peter Port. The panel is in the collection of Paris Musées.

The vision behind the garden is that of a collaboration between gardening, heritage, and literature. A thing of beauty in itself, the Victor Hugo Garden is an introduction to the wealth of splendid gardens in Guernsey, an island blessed with a mild climate, and at the same time a celebration of Victor Hugo; a chance to learn about the great humanitarian, his life and work, and the many years he spent in Guernsey, in the most happy and gentle of ways; an encouragement, too, for visitors to spend time in the writer’s own garden and residence at Hauteville House. One of Guernsey’s most iconic and most photographed landmarks, Victor Hugo’s statue, now has a backdrop of luxuriant trees and flowers. It was Raymond’s idea, based on his experience of displaying his clematis at the Chelsea Flower Show, to assign QR codes to the plant labels and to the quotations from Victor Hugo in the Garden to enable those who are interested to obtain further information from this website.

Victor Hugo was himself a garden designer; a visit to the garden at Hauteville House is evidence of that. Gardens play a major rôle in his poems, plays and novels. For Hugo gardens become theatres in which he often sets the action of his poems and other writings. Hauteville House is decorated with images of flowers; he loved greenhouses, which were an extension of the house into the garden; and he curated his garden over the years as a reflection of his relationship with nature. An ecologist before his time, Hugo saw himself and mankind as an integral part of nature, and pleaded for it to be respected and to be allowed to thrive.  Plants, trees, birds and insects fascinated him, and were amongst the subjects through which he could express his philosophy of life and death and his thoughts about God and his hopes for the future of mankind and its stewardship of the earth. Raymond Evison shares these concerns. As a plantsman who works to to preserve endangered species it was this aspect of Hugo’s interest in nature and conservation that he felt particularly inspired by.

Most of the plants in our Victor Hugo Garden were chosen because of their connection to Hugo’s life, his writing, or to themes in his philosophy. As the designer, Raymond was presented with quite an eclectic list of plants to work with! The choice of plants had to be a practical one, as the Garden will be maintained by volunteers. Although Victor Hugo writes frequently of the pleasure he takes in humble wild plants and the importance of unfettered nature to the health of society and of the earth, and in Toilers of the Sea attributes an important place to the wild flowers of Guernsey, these rampant growers and spreaders were thought to be too difficult to control in a park setting. We couldn’t leave them out entirely, however, and some of the less vigorous are represented in the planting of the ‘wild’ part of the garden! Raymond was keen that the planting remained informal to reflect Hugo’s own preferences – a collection of plants and flowers in natural harmony with each other. New Versailles tubs on the terrace were made in the workshops at Guernsey Prison. Victor Hugo would very much have approved. Raymond generously provided two splendid urns for the stone columns, filled with succulents provided by Chris Chatfield of Guernsey Gardens. Guernsey’s Stewart Ewing made the delightful low willow fencing that encloses what is probably the central part of the great border – Déruchette’s garden.

We would like to thank the Agriculture, Countryside & Land Management Department of the States of Guernsey, particularly Jan Dockerill, for their support in setting up the garden and practical help in maintaining it – it will take a lot of watering! – and Plant Heritage Guernsey and The Saumarez Park Victorian Walled Kitchen Garden for their interest and help in sourcing plants, especially heritage and local varieties. Our Honorary President, Gérard Pouchain, made suggestions for texts; our Vice-President Assist.-Prof. Dr Bradley Stephens, and other experts Prof. Em. Marva Barnett, Assist.-Prof. Karen F Quandt , Prof. Fiona Cox, and Timothy Adès all provided support and a favourite quotation.

Thoughts from the Chair

The Victor Hugo Garden is an ongoing project. Like its trees, plants and flowers it will grow, thrive and change over time. The years 2020 and 2021 were difficult times, and although we could not obtain every plant we wanted to, and while there is far more to one of the greatest men of the nineteenth century than the planting of a garden could ever express, we are satisfied. Our Victor Hugo Garden has been achieved for a relatively small financial outlay – but a very large outlay of commitment, engagement, and sheer hard graft! The Victor Hugo in Guernsey Society’s heartfelt thanks go to everyone concerned, but most of all to Victor Hugo, for being what he was, and for gracing Guernsey with his presence over 150 years ago.